Time to accept myself. Completly.

For some people it is ment to be alone. I belive, I’m one of them.
Yesterday Krzysztof from my class has visited me in the morning. Of course, because of his visit I had to stand up earlier to clean up the house. But that’s OK for me. I’m realy glad that he has visited my place. We talked a little, drunk coffe and tea. It was nice. He will visit me today agian to give me back my notes, that he took yesterday. When he was at my place, girls went to a city to buy something to wear. Of course they came back with new computer keyboard…

All day long I have done nothing. Of course not mentioning cleaning up the flat. Then I have printed some materials for my exams (sonner or later I will have to learn something) and spent a lot of time chating with my friends and visitig people on GayLife portal. In the afternoon I went asleep for an hour. I felt sleepy and I had knew that this night is going to be long, so I’ve decided to sleep a little bit. It was hard to wake up, but I did it.

At 9:20 PM I was at Metro Politechnika waiting for other girls to come. Ilona was already there, Marta came two minutes later and Kaśka… Well, it’s a long story. She was there but in the other place that we couldn’t find each other. It doesn’t matter. After all, at 10 PM the party in Paradise disco have started. And I have to admit that it was quite okay. Music was good, atmosphere was fine, I had nice time, many people came. And Andrzej was there, too. He came because he had knew that I will be at the disco. He met my girls, we danced, talked, had fun. Many nice boys showed up. Emil RedRex, a porn star, was there, too. I kind of like him. I also saw Piotr Drugi Wawa, boy-friend of Piotr, with his friend Krzysztof, but I could see Piotr himself.
Last girls of mine left us at 1:30 AM so we’ve decided to go to Utopia. Andrzej was by car, so it was easy.

At the Utopia’s door we were suprised that door selection didn’t agree for two boys and 3 girls to come in. It’s normal that girls weren’t aproved, but boys? We went in without any problem. Then we met David with his new boy-friend Radek, and some Andrzej’s friends. Some of them also from GayLife portal. I haven’t danced a lot. I was already tired by Paradise disco, besides the crowd was big and there was no place to move. By the way… how come Paweł Kowalczyk wears a watch?! Doesn’t he know that it is not cool?
Many people asked David about Andrzej. The liked him. David’s boy-friend said even that Andrzej is the prettiest boy in the club. So they were all talking, chating… I was dancing. I saw Mikołaj Lzy-Chlopca. I said 'hello’ of course, and said something about his blog. He wasn’t interested. I think I saw his new boy-friend. But it all doesn’t matter.

During the disco I understood. Now I know, that it is my destiny to be alone. I am desperately pathetic and I’m meant to be alone. And it is wonderfull in a way. First of all – it is good that I know it. Second of all – I will no longer look for boy-friend. Of course I will look at them, talk about them and I will still give them marks. But that’s all. I know what my destiny is. Ad third of all – it is time to completly accept it.

I have no idea why I have written this note in English. It is to late to correct it. But I hope, I haven’t done many mistakes. 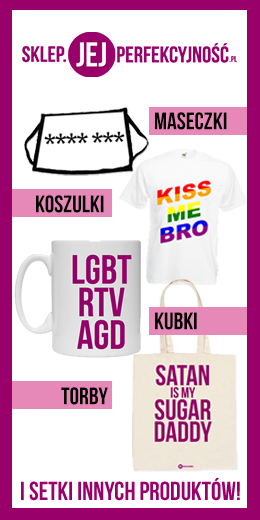